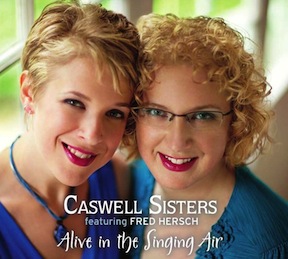 The Caswell Sisters
Alive in the Singing Air

Sisterhood is powerful, but when it comes to the capaciously talented musical siblings Sara and Rachel Caswell, sisterhood also sounds surpassingly lyrical, persuasively swinging, and wholly committed to melodically charged improvisation. In their first collaborative album, Rachel, a charismatic vocalist possessing a sumptuously warm tone, and her younger sister Sara, a virtuosic violinist steeped in a variety of musical traditions, join forces on Alive in the Singing Air (Turtle Ridge Records), a breathtaking collection of songs featuring Fred Hersch, one of jazz’s most celebrated pianists.

The album features a fascinating array of material that ranges far beyond the usual American Songbook standards. The Caswells open with “Song of Life,” a soaring, almost ecstatic affirmation from Hersch’s inspired partnership with British jazz singer Norma Winstone. They also interpret the aching ballad “A Wish,” another gem from Hersch and Winstone’s memorable 2003 collaboration Songs & Lullabies that should become a Valentine’s Day standard.

“Both of us are drawn to Fred’s style and sensitivity,” Rachel says. “He creates such an easy foundation to play on, and he loves working with singers. It was a dream. After he agreed to come on board for this album, we were going through material and he started playing some things from his album with Norma. The two songs we picked spoke so much to us. They’ve become part of our repertoire.”

In many ways the album offers a road map for the savvy jazz singer. With only four songs that can properly be called standards, Singing Air offers a steady flow of revelations. In a heartfelt hat tip, the sisters interpret “I Sing for You,” a gorgeous piece by the inimitable, too-little-known West Coast jazz singer Nancy King. 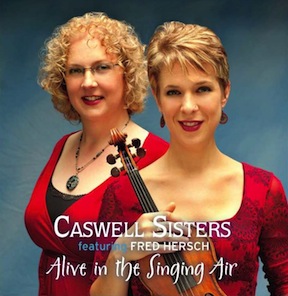 “Whenever anybody asks about my favorite singers, she’s always near the top,” Rachel says. “She’s a gem of the genre, and such a neat person, and yet so underutilized, though I think more people are aware of her since her 2006 album with Fred Hersch.”

In the Caswells’ hands even the most familiar tunes turn newly enthralling, like Hoagy Carmichael’s swooning ode to heartbreak “I Get Along Without You Very Well,” and a slower than usual take on the Mort Dixon/Ray Henderson warhorse “Bye Bye Blackbird” that captures the abject lyric’s full measure of sadness.

Nowhere is the soul-deep connection between the sisters more evident than on “Sweet Adelphi,” a composition by saxophonist Christine Jensen (who happens to belong to another powerhouse jazz sisterhood with trumpeter Ingrid Jensen). Featuring an intricate but effortless-sounding wordless vocal line, the piece is built around the sisters’ miraculous blend of voice and violin. The album closes with another intricate wordless vocal on trumpeter Kenny Dorham’s steeplechase “Asiatic Raes” (also known as “Lotus Blossom”), an exhilarating performance that promises much more to come from these confident confidantes.

“Rachel and I seek out those pieces with interesting twists and turns harmonically,” Sara says. “We love beautiful soaring melodies that go in unexpected directions, but feel very logical. ‘Sweet Adelphi’ is a great vehicle that really lets our timbres sync together.”

Rachel Caswell (b. 1973) and Sara Caswell (b. 1978) grew up in a seriously musical household, the daughters of two academics with doctorates in musicology (“We were doomed,” jokes Rachel). Their parents’ scholarship was matched by a commitment to performance. While Austin Caswell taught for three decades at Indiana University’s Jacobs School of Music, including several years as Chair of the Musicology Department, he was also active in several choral groups. Judy Caswell served as an organist in various churches. Their love of all kinds of music suffused the household.

“They exposed us to so many styles of music,” Rachel says. “We studied early music, classical repertoire, piano, and played in high school band, jazz band, and orchestra as well as performing in a family trio. Eventually jazz is what stuck and became our identity.”

“What was beautiful is that our parents supported us every step of the way,” Sara adds. “At that time there wasn’t the benefit of iTunes and YouTube. You had to seek out people and resources, and they were able to help us on the journey.”

The sisters have walked remarkably parallel paths. As children they both studied with the distinguished jazz educator David Baker, a longtime Indiana University music professor, and both attended IU on full scholarship. They both graduated with High Distinction in Classical Performance and Jazz Studies, and went on to earn Master’s degrees in Jazz Performance (Rachel at Boston’s New England Conservatory and Sara at Manhattan School of Music).

Invited to participate in the Thelonious Monk Institute’s Summer Residency Program in Aspen/Snowmass, they established important contacts with jazz masters. Rather than competing with each other, they turned into creative allies, a mutually respectful relationship facilitated by their four-year age difference.

“When Sara got to high school, I started college,” Rachel notes. “We continued to develop independently as musicians, but were aware of each other’s activities. And although we’ve gone down our own paths, we’ve come to appreciate each other as adults and working musicians. When I did my graduate recital at NEC, I thought how can I do it without my sister? She was going to be there anyway so I asked if she would play two or three tunes with me, and things developed from there. It just seemed obvious.”

Based in her hometown of Bloomington, Indiana, Rachel Caswell has performed in a wide array of jazz settings, including the Glenn Miller Orchestra, John Blake Jr., Ingrid Jensen, the Billy Taylor Trio, and Curtis Fuller. Her 2003 debut recording, Some Other Time, confirms the respect she’s earned from her peers as aptly described by Ingrid Jensen, who noted that Rachel’s voice is “capable of expression and artistry that parallel those of some of the great horn players in improvised jazz music—not to mention all of the wonderful singers out there. She is a force to be reckoned with.”

The foundation of the sisters’ partnership was already apparent on their solo albums, but Alive in the Singing Air captures their remarkable musical relationship in full flight. More than a mutual admiration society, the Caswells draw on a lifetime of shared experiences and a rich trove of bandstand encounters apart. The result is an album that’s exquisite and adventurous, earthy and elevated, and unlike anything else on the scene.

“We can’t deny it’s a nice hook,” Rachel says. “People like the novelty of violin and voice, and the idea of siblings doing something together. But when I think of the sound I like, Sara’s playing is what pops into my head. In terms of somebody who’s going to support and complement me, she’s the obvious choice. It’s the classic jazz quintet, translated into our own image.”